For the country, see Belgium. 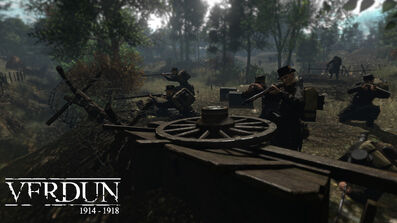 "Facing overwhelming odds, the Belgians gained a reputation for fierce and rugged defensive capabilities. Fighting in their own sectors and with the support of heavy siege weapons they can put up an excellent fight."
- Official Verdun Squad Guide[1]

The Belgians are an Entente sentry squad added to Verdun in the Horrors of War free expansion, along with two US and two German squads.

The Belgians are equipped much like a regular frontline mortar squad – they have an NCO, a marksmen, a machinegunner and a grenadier. They use Browning weapons (manufactured in Belgium), Mauser weapons from Germany, and borrowed French weapons like the Chauchat. Besides their Browning weapons, one of the only other items of note for the Belgians is their use of body armour, which adds extra hitpoints to the character, meaning one or two more shots are needed to take them down.

The Belgian uniforms start as dapper top-hats and coats, but later become brown with body armour as the squad level rises.

The Belgian squad NCO has the ability to call artillery in the form of a heavy mortar strike, which is a single blast from an off-screen seige gun. It does incredible damage to a single point, and when used by a top-tier squad its area of effect is enough that one would want to get very well away.

However, it is hampered though by its long recharge time, somewhere between that of the mortar shot and gas. The Sentry class allows them to spawn on each other like the scout squad in their own trenches, and like the normal rifle squad when venturing forwards.

Like all Sentry classes, they also gain a defensive bonus when in their NCO's aura.

The role of the 'Korporaal' in the sentry section is to hold a line at all cost.

The Sentry is a hardened defender who dominates no mans' land with long range fire.

Motto: "Use the flanks"

This static Gunner defends his position with a range of machine guns.

The 'Renner' is a sentry whose task is to move along the trench and defend weak spots.

Community content is available under CC-BY-SA unless otherwise noted.
Advertisement