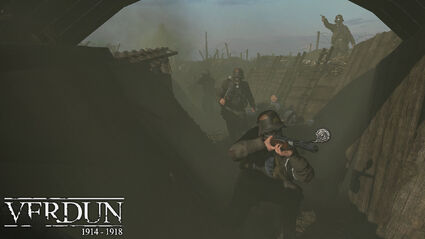 The Stoßtrupp, or Stosstrupp, are a German assault squad. As a breaching unit, the Stoßtruppen are based around their commander and command orders. The squad passive ability allows fallen squad mates to respawn on any squad member that is near an assault order. Along with faster health regeneration, the squad is capable of closing in the distance between trenches at a fast pace.

To help in the task of clearing a trench, the squad can equip itself with a maximum of 12 grenades, call in gas, and use the SMG in the guise of the MP18i, making the squad a threat in close quarters combat.

The role of the Truppführer is to lead by example. Placing decisive assault orders, he can call a chemical agent to occupy the enemy while advancing.

The Truppführer can order gas canister bombardments on enemy positions. The different gasses vary in chemical make-up, each with their own deadly properties. The main difference between the 4 chemicals possible is the time it takes for them to build up a deadly dose inside a man's body, however all soldiers are equipped with a gas mask which they can use for protection (to equip a gas mask, press '4'). The gas cloud formed also is useful in masking troop movements and allowing your forces to close in with and destroy the enemy.

The role of the flanker is to follow the assault order and surprise the enemy by laying down cover fire from the flanks using grenades.

Possessing excellent weapon handling skills, the task of the weapon specialist is to fearlessly close in on the enemy and lay down concentrate fire.

The experimental weapons expert of the German forces, the Waffenspezialist is the only unit in the game capable of using the MP18i submachinegun. The Waffenspezialist has a variety of weapons at his disposal, and superior training allows swift weapon draw and reload. When near an assault order, the Waffenspezialist will be less suppressed by enemy fire than others and his gas mask can be equipped faster.

On the downside, this soldier has decreased movement speed when outside the squad leader's aura. So make sure to stay close to Truppführer when trying to breach a trench.

The Nahkämpfer specializes in close quarters combat. Following the assault order he can clear the enemy out using grenades.

The German explosives expert, the Nahkämpfer is always equipped with grenades. When near an assault order, the Nahkämpfer receives additional experience for explosive kills and can't be spotted by scouting planes.

When not near the order, the Nahkämpfer obtains decreased stamina regeneration, so make sure to stick near assault orders when going for a breach and work together with the Sturmman to clear the trench with grenades.

Community content is available under CC-BY-SA unless otherwise noted.
Advertisement